Below is a quick overview of the new version. For a detailed list of new features and changes see the version history.

The original stitching engine in PTGui started life at a time when most PCs were still running on a single processor and graphics cards were only used to display things on a screen. Computers could become faster by increasing the clock speed at which the processor was running. But in the past few years CPU clock speeds have approached physical limits and instead computers have become more powerful by increasing the number of processor cores. Also through new technologies the graphics card (GPU) can be used not only for display but for general computing tasks as well. A GPU is an extremely powerful processor with several hundreds or even thousands of processor cores. When programmed the right way they can process data extremely fast but software has to be rewritten to be able to use that power.

That's exactly what's new in PTGui 10: a new stitching engine, rewritten from scratch to get the best performance on modern hardware. For GPU processing the stitcher uses OpenCL, a technology supported by both major GPU vendors (NVIDIA and AMD) and supported on Windows and Mac. Of course stitching without using the graphics card remains possible, and CPU stitching performance has been improved as well, especially on computers with 4 or more CPU cores. The new stitcher also uses significantly less memory, which speeds up stitching of large gigapixel panoramas in particular.

The new stitching engine is fully compatible with previous versions; changes are entirely under the hood and the only noticable difference is a significant reduction in stitching time.

So how much speedup should you expect compared with PTGui 9? This depends on many factors such as the GPU's processing power versus the CPU speed, how much time is spent writing the results to the disk, etc. Initial tests suggest a speedup anywhere between 1.5x and 10x depending on hardware and on the kind of panorama. But to give one benchmark as an example: the Gigapixel Panorama Speedtest on a particular machine (6 core Intel i7, Windows 8.1, 32GB of RAM, NVidia Geforce Titan, Samsung SSD) stitches in 22 seconds, compared to 151 seconds in PTGui 9.2. This is almost 7 times as fast!

To use the GPU for stitching a video card supporting OpenCL 1.1 is required. On Windows every recent GPU from AMD and NVIDIA should work. PTGui needs at least 512MB of video memory, but 2 GB is recommended: although the panorama doesn't need to fit entirely in the video RAM, moving data between the CPU and the GPU is relatively slow and should be avoided to get the best performance. On most Windows desktop computers the GPU can be replaced easily; adding a new $300 graphics card will result in a significant speedup.

The speed gains on laptop computers are limited: many laptops only have integrated graphics, which are not supported by PTGui (and would be slower than the CPU anyway). Many higher end laptops have a discrete GPU. These 'mobile' GPUs are less powerfull than desktop graphics cards (in order to keep down power consumption) but will allow around 1.5 to 2x faster stitching.

On Apple computers support for GPU acceleration is currently limited. Except for the high end models, recent iMacs and Macbooks only have integrated graphics which are not supported, and there's no option to replace the GPU. Only the previous generation Mac Pro has replaceable graphics hardware. The new (2013) Mac Pro on the other hand was designed with GPU computing in mind and PTGui will stitch panoramas extremely fast on this machine. On a Mac PTGui requires OS X 10.9 (Mavericks) or later for GPU stitching.

For up to date information about supported hardware see 8.1. Which GPUs are supported by PTGui?

Finally it's worth noting that with this improvement in stitching speed, disk speed is more and more becoming the limiting factor. Replacing a spinning hard disk with an SSD will make even more difference than before.

Also part of the new stitching engine in PTGui 10 (but in the Pro version only) is a new tone mapping algorithm for HDR panoramas. The new algorithm gives natural looking results, comparable in quality to, or better than Exposure Fusion. It's easy to use and much faster than the previous algorithm, which could take a very long time for large panoramas.


As always the PTGui tone mapper properly handles spherical (equirectangular) panoramas, whereas other tone mapping algorithms will give visible artifacts in the zenith and nadir.

The Exposure/HDR tab in the Pro version has been reorganized and now allows the tone mapper to be used for regular low dynamic range panoramas (i.e. without bracketing) as well: 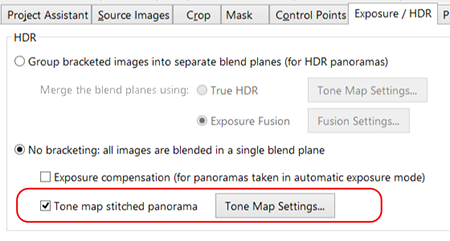 The tone mapper brings the same benefits to low dynamic range panoramas as it does for HDR panoramas: shadows are boosted and highlights are reduced, without affecting local image contrast. Here's an example of tone mapping used on a regular, non bracketed panorama (click to compare):


Of course, boosting the shadows in any image will also increase image noise, therefore the amount of compression that can reasonably be achieved is limited. But in certain cases this feature may be used to take a panorama without bracketing, where otherwise HDR would be needed. To do so, use an SLR with a large sensor, at low ISO, shoot in RAW and convert to 16 bit TIFF in order to maximize dynamic range. Underexpose the scene such that the highlights are not blown out, because clipped highlights cannot be recovered afterwards. The underexposure is later compensated by tone mapping.

The tone mapper is also useful when panoramas are taken in automatic exposure (aperture priority) mode. Exposure Compensation can be enabled in PTGui to compensate for the differences in exposure. This effectively increases the dynamic range of the stitched panoramas, basically resulting in HDR without bracketing. Tone mapping is then used to reduce the global image contrast in the stitched panorama to make it suitable for display.

This works best for gigapixel panoramas: images taken with a long lens only contain a small portion of the scene so the per-image contrast is usually limited. With an 180 degree fisheye lens this is not so: because it captures a very wide area of the scene both the sun and shaded areas may appear in the same image. 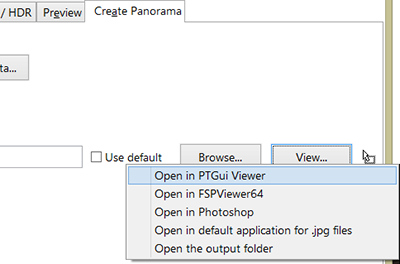 The viewer can be accessed by clicking the View button in the Create Panorama tab. But it's also available outside PTGui, to view any panorama stored on the computer. The viewer supports full screen viewing both on Windows and Mac and uses OpenGL acceleration for smooth performance.

The configuration of external viewers has been changed: previously one preview application could be configured for each of the projections Rectilinear, Cyilindrical and Equirectangular. In PTGui 10, up to 3 general purpose applications can be configured instead. It's possible for example to send a stitched panorama from PTGui to Photoshop, regardless of the projection, by clicking on the View button in the Create Panorama tab (see the above screenshot).

For a list of all changes see the version history. To try out the new features PTGui 10 can be downloaded here.

You can upgrade from an earlier version to PTGui 10 for an upgrade fee, or free of charge, depending on the original purchase date. A free trial version is available; you can use it next to your current version by installing to a different folder.
PTGui and PTGui Pro are products of New House Internet Services B.V., Rotterdam, The Netherlands. The PTGui and PTGui Pro software, related documentation and all contents on this site are © Copyright 2000-2021 New House Internet Services B.V., Rotterdam, The Netherlands. All rights reserved.