A new version of PTGui will be released soon, and you can download a beta version already. This beta version is intended for testing; keep in mind that it may contain bugs or run unstable.

On the outside PTGui 12 may look much like the previous version. But under the hood it features a rewritten stitching engine and a brand new blender! 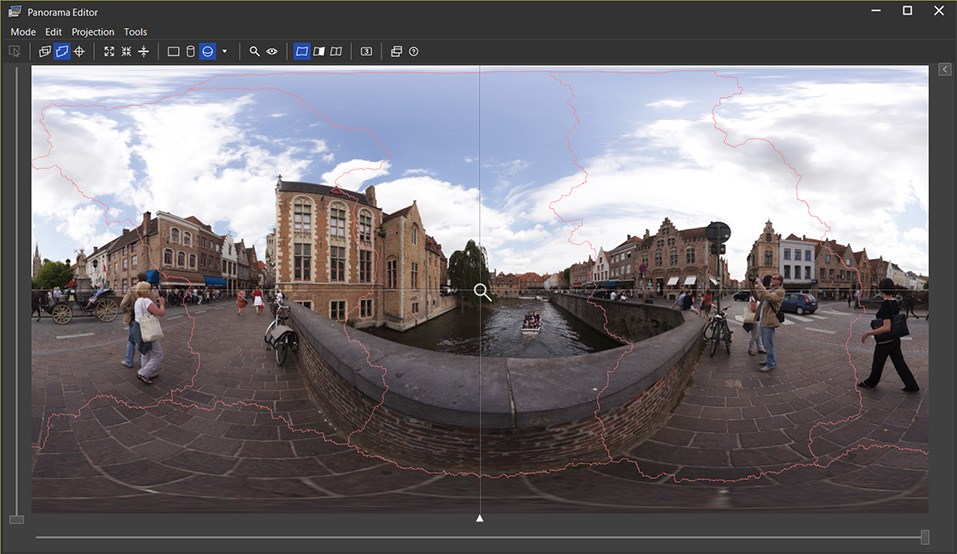 PTGui Pro 12 will analyze the regions where images overlap, and place the seams in those areas where the overlapping images are most similar. This means it automatically routes the seams around moving objects. Also, stitching errors from parallax will be hidden as much as possible.

The Panorama Editor and Detail Viewer show a live preview of the seams. Seam placement happens automatically and on the fly, but you can still fully control where the seams should go. As in PTGui 11 the seams can be manipulated using masks: a red mask will exclude an object and move the seam away from that area, while a green mask forces an area to be included in the blended panorama. Masking doesn't have to be done precisely at all: usually a green or red dot somewhere on an object is sufficient. The seam finding algorithm will recognize the object's contours and re-route the seam in an optimum path around it.

For PTGui 12 a new blending engine has been built which requires no overlap at all. Brightness differences are distributed across the entire image, such that any differences are minimized where the images meet at the seams. Only the area enclosed by the seams is used, with no risk of ghosting from hidden objects. Combined with optimum seam placement this can create absolutely seamless panoramas even in difficult situations with moving objects.

The new blender is of course capable of blending 360° equirectangular panoramas. As far as we know PTGui is still the only panoramic blender to properly handle the zenith and nadir of fully spherical panoramas. Even images with significant exposure differences are blended very well.

HDR in PTGui 11 is based around 'blend planes': at each EV a complete panorama is stitched and blended. Finally the blend planes are merged to an HDR panorama or combined using Exposure Fusion.

To work with the new optimum seam placement, the HDR workflow had to change. A problem with the blend plane approach is that the optimum seam will turn out differently for each blend plane. Around the seams, pixels from different bracketed sets would be merged to HDR and this would result in ugly HDR artifacts. To solve this, PTGui 12 reverses the processing pipeline: now each set of linked images is first merged to HDR and then the HDR images are blended (using optimum seam placement) to an HDR panorama.

In fact, PTGui Pro 12 no longer distinguishes between HDR and non-HDR panoramas, every panorama is HDR! The stitching pipeline uses floating point data internally and any panorama, bracketed or not, can be rendered to HDR formats such as OpenEXR.

A handy feature in PTGui Pro 12 is the new 'Fill Holes' function. If enabled, all transparent areas in the panorama will be filled with a smooth color gradient matching the surrounding areas. While not not a true replacement for patching in an external image editor, it works well for example for filling up the blue sky in a drone panorama. Or it can be used as a quick way to cover the nadir of a spherical panorama.

In combination with masking it can be used as a tool to hide or blur objects: simply paint the unwanted contents with a red mask; PTGui will fill the resulting gaps.

Fill Holes can be enabled in the new Blending sidebar in the Panorama Editor.

Long overdue, PTGui 12 is finally fully color managed! While PTGui 11 offers basic support for a color managed workflow, by embedding the proper ICC profile in the stitched panorama, the user interface may display images in the wrong color. PTGui 12 recognizes color profiles in source images and will display them properly on screen.

Some functionality has been removed in PTGui 12:

Since this is a beta version it may contain bugs; therefore your feedback is much appreciated. Post any bugs, comments to the PTGui Google group but please check the Known Issues list below before posting.

The following problems are known to exist in the current beta, we're working hard to solve these:

PTGui 12 (both the beta and the final 12.0 release) will be available free of charge to licensed users who purchased a license on or after August 1st, 2018. If you purchased before this date, you may upgrade your license here. But please keep in mind that the beta version will certainly contain bugs, so you may want to wait until the final version has been released. A free trial version of PTGui 12 beta is available.

Installing multiple versions side by side

You can try the beta version without overwriting your existing copy of PTGui. On Windows select a different installation folder when prompted during installation (e.g. C:\Program Files\PTGui Beta). On Mac the PTGui application can be copied from the install disk image, renamed, and installed in any folder on your mac, not just the Applications folder.

If you have accidentally overwritten your copy of PTGui you can always download the former version again from this website.