A panorama, or in fact any photograph, is a flat representation of the scene around the camera. Essentially, a 3 dimensional world is projected on a flat surface. There are multiple ways to do this and therefore PTGui offers a wide choice of panoramic projections. There is no perfect panoramic projection; each projection has its own properties and limitations.
The desired projection is selected in PTGui using the projection buttons ( 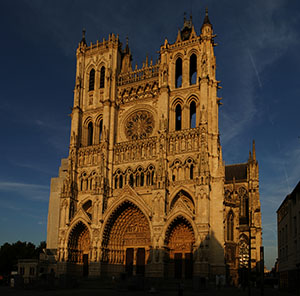 Rectilinear projection has the unique property of preserving all straight lines: any line that is straight in real world, is displayed as a straight line in the panorama. This makes it a suitable projection for architectural panoramas.

However due to the same property it is physically impossible to display panoramas wider or taller than 180 degrees in rectilinear projection. At higher field of view, stretching becomes apparent in the sides and corners of the image. This stretching becomes severe already at 120 degrees and more.

The corner stretching effect can be reduced by using horizontal and/or vertical compression: click on Projection Settings in the Panorama Editor and move the compression sliders to the right. By compressing the rectilinear view it is possible to create panoramas up to 180 x 180 degrees without extreme distortion. Horizontal and vertical lines are still preserved as straight but diagonal lines become curved when compression is used.

For panoramas wider than 180 degrees one of the other projections should be used:

This is the result of projecting the panoramic sphere onto the surface of a cylinder:

Cylindrical panoramas can have a horizontal field of view of up to 360 degrees. In the vertical direction the projection behaves similar to rectilinear: the vertical field of view has a physical limit of 180 degrees, and a practical limit of about 120 degrees. Cylindrical projection therefore is mostly suitable for single row 360 degree panoramas.

Other than this, the properties are identical to cylindrical projection: the vertical field of view is limited to 180 degrees; only vertical straight lines and the horizon line remain straight lines in the panorama.

This is a latitude/longitude projection of the panoramic sphere: 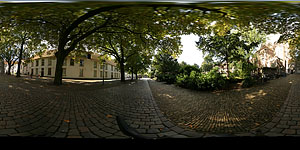 The field of view of equirectangular projection is not limited (although PTGui is limited to 360x180 degrees), which makes it the choice for full spherical (360° x 180°) panoramas.

As with cylindrical and mercator projection, only vertical lines and the horizon line are projected as straight lines in equirectangular projection. All other lines become curved.

These projections are equal to Cylindrical, Mercator and Equirectangular, respectively, but rotated 90 degrees. They support a vertical field of view of up to 360 degrees while the horizontal field of view is limited to 180 degrees.

These projections are suitable for tall vertical panoramas.

A compression setting is available for this projection. At the default full compression the result is a true fisheye projection. When the compression is reduced (slider is moved leftwards) the projection morphs into rectilinear projection. A fisheye view with reduced compression can be used as a compromise for wide angle rectilinear views: straight lines are preserved near the center of the panorama but will become more curved towards the edges.

Named after an 18th century painting genre, this projection preserves all diagonal straight lines through the center of the panorama. It is most suitable for scenes with a clear 'vanishing point' such as this one:

The Transverse Vedutismo projection has the same properties but is limited to 180 degrees horizontally and 360 degrees vertically and could be used for tall vertical panoramas.

Stereographic projection is the projection of a sphere, as seen from the pole, onto a flat surface. It is famous for the 'little planet' views:

To make it easy to create little planets an additional projection 'Stereographic Down' is provided, which is the same projection but rotated such that the nadir of the scene is in the center of the panorama.