On the outside PTGui 12 may look much like the previous version. But under the hood it features a rewritten stitching engine and a brand new blender! 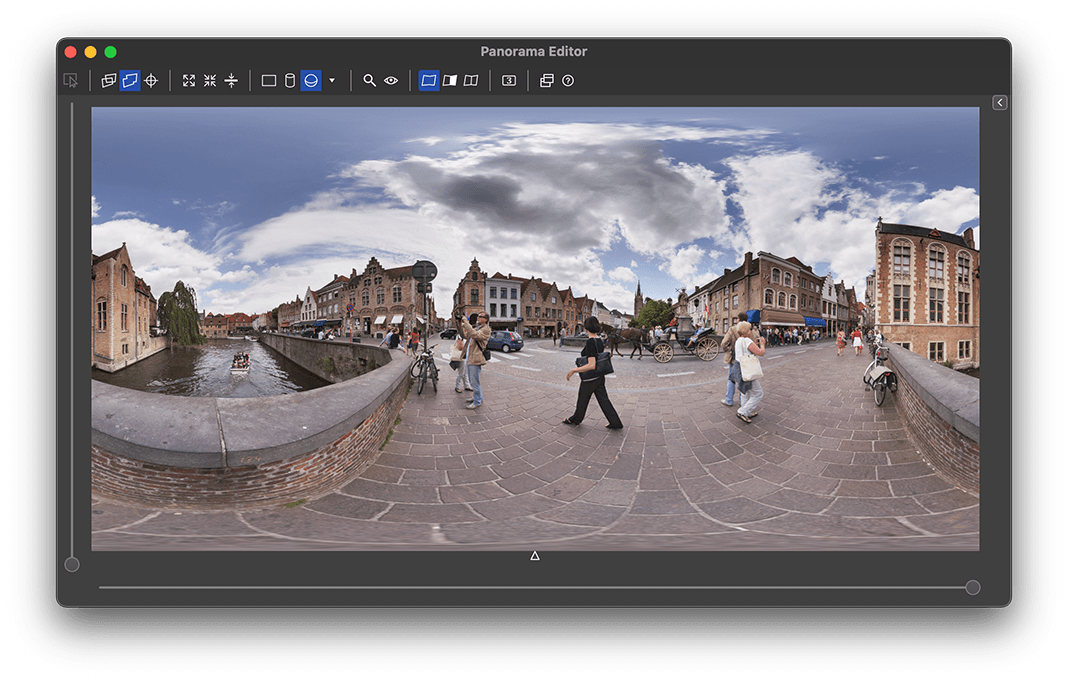 PTGui Pro 12 will analyze the regions where images overlap, and place the seams in those areas where there is the least difference between the overlapping images. It will attempt to automatically route the seams around moving objects. Also, stitching errors from parallax will be hidden as much as possible.

The Panorama Editor and Detail Viewer show a live preview of the seams. Seam placement happens automatically and on the fly, but you can still fully control where the seams should go. As in PTGui 11 the seams can be manipulated using masks: a red mask will exclude an object and move the seam away from that area, while a green mask forces an area to be included in the blended panorama. Masking doesn't have to be done precisely at all: usually a green or red dot somewhere on an object is sufficient. The seam finding algorithm will recognize the object's contours and re-route the seam in an optimum path around it.

For PTGui 12 a new blending engine has been built which requires no overlap at all. Brightness differences are distributed across the entire image, such that any differences are minimized where the images meet at the seams. Only the area enclosed by the seams is used, with no risk of ghosting from hidden objects. Combined with optimum seam placement this can create absolutely seamless panoramas even in difficult situations with moving objects. Even images with significant exposure differences are blended very well.

The following animation shows the differences between unblended, Multiband blending and the new Zero Overlap blending: 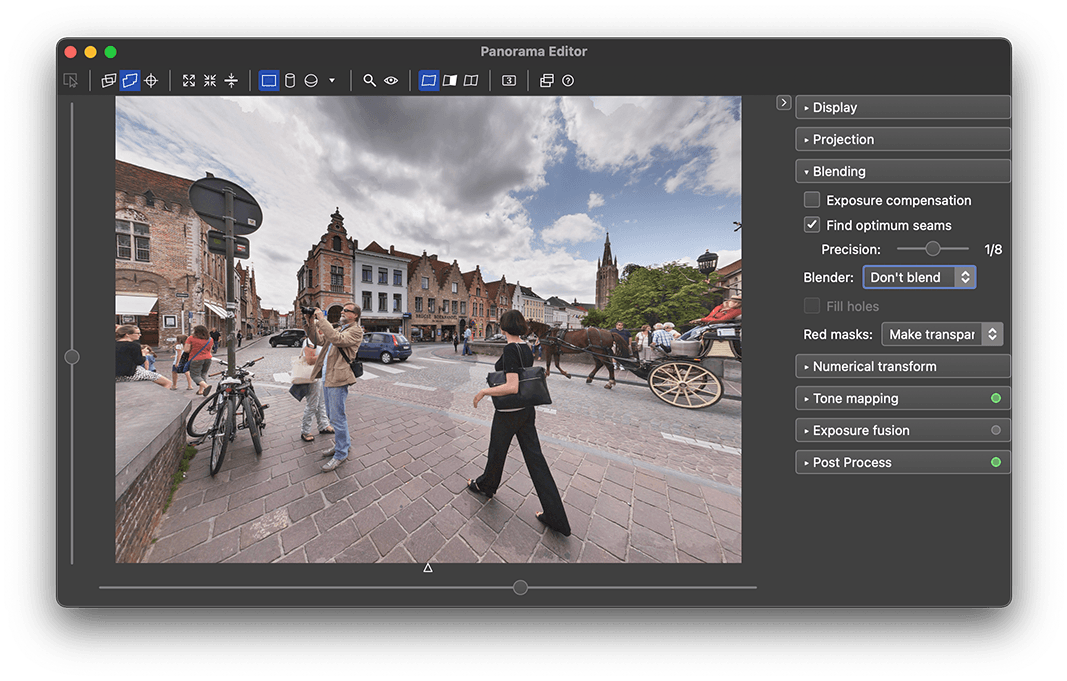 HDR in PTGui 11 is based around 'blend planes': at each EV a complete panorama is stitched and blended. Finally the blend planes are merged to an HDR panorama or combined using Exposure Fusion. Blend planes required a consistent exposure for each blend plane and therefore the panorama had to be taken in manual exposure mode.

In fact, PTGui Pro 12 no longer distinguishes between HDR and non-HDR panoramas, every panorama is HDR! The stitching pipeline uses floating point data internally and any panorama, bracketed or not, can be rendered to HDR formats such as OpenEXR.

The purpose of linking images has changed: in PTGui 11, linked images would get the same yaw, pitch and roll angles but linking did not otherwise affect HDR processing. In PTGui 12, linking the images will tell PTGui that they belong to the same bracketed set but they don't necessarily have the exact same yaw, pitch and roll. In the 'merge to HDR, then blend' workflow these linked images will be combined to a single HDR source image. In the 'create blend planes' workflow, linking is also necessary because it tells PTGui to place the seam identically for these images. This is important because differently placed seams would cause artifacts when merging the blend planes to HDR. 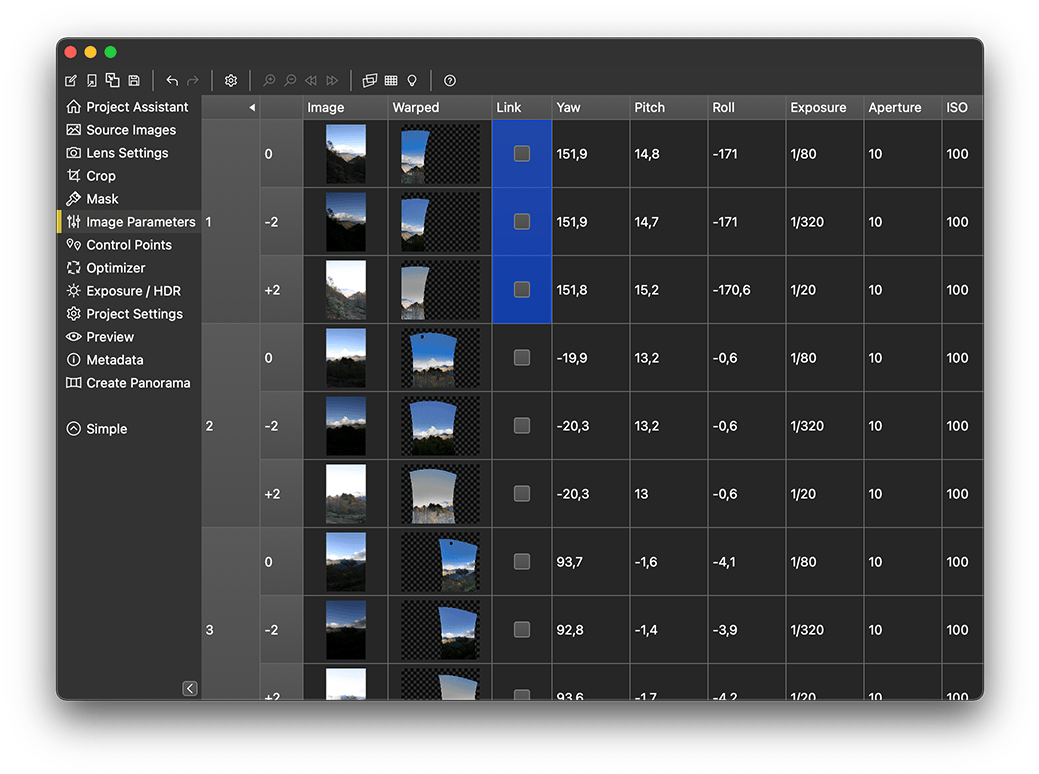 This may seem complicated, but in practise the workflow hasn't changed. If the images were shot in a repeating bracketing sequence, PTGui detects this and will offer to set up HDR processing automatically: 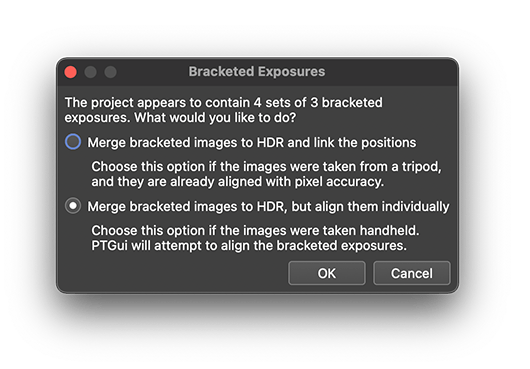 A handy feature in PTGui Pro 12 is the new 'Fill Holes' function. If enabled, all transparent areas in the panorama will be filled with a smooth color gradient matching the surrounding areas. While not not a true replacement for patching in an external image editor, it works well for example for filling up the blue sky in a drone panorama. Or it can be used as a quick way to cover the nadir of a spherical panorama.

In combination with masking it can be used as a tool to hide or blur objects: simply paint the unwanted contents with a red mask; PTGui will fill the resulting gaps. Fill Holes can be enabled in the new Blending sidebar in the Panorama Editor.

Long overdue, PTGui 12 is finally fully color managed! PTGui 12 recognizes color profiles in source images and will display them properly on screen. PTGui can transform between color spaces; the desired target color profile can be selected in the Create Panorama tab. Panoramas from RAW source images are no longer limited to sRGB as in PTGui 11.

At last, PTGui has been ported to Linux! The Linux version is fully functional, including support for OpenCL GPU acceleration. A PTGui license is platform independent, so a single license now allows you to run PTGui on all major desktop operating systems.

A new Post Processing side bar was added to the Panorama Editor, for adjusting the toning curve, white balance and saturation. This is useful in particular when working with RAW source images: 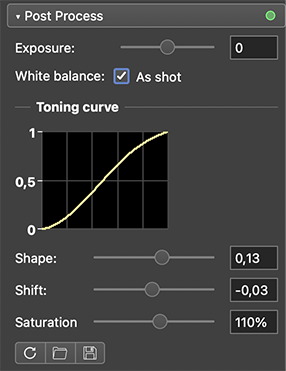 For all details see the version history. You can download PTGui 12 here, or use Help - Check for Updates to update your currently installed PTGui version.

All licenses purchased on or after 1st of August 2018 are valid for PTGui 12. If you purchased before this date, you may upgrade your license here. As always, one year of free updates is included with your purchase. A free trial version is available; you can use it next to your current version by installing to a different folder.